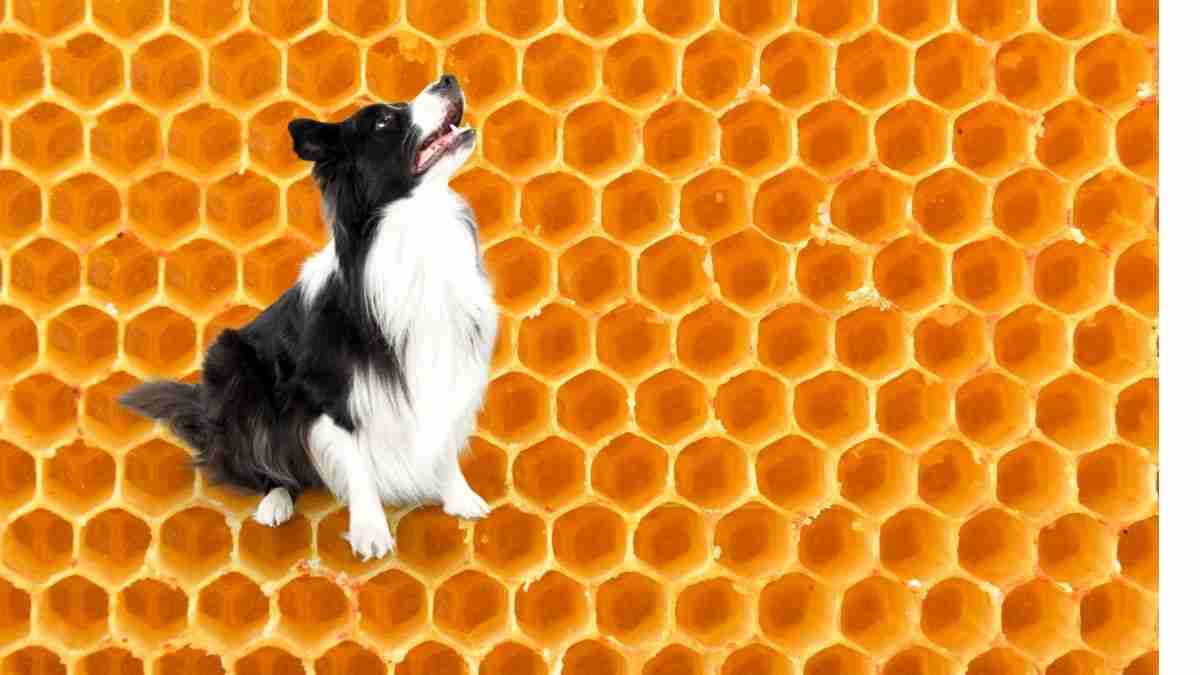 Good quality honey has many health benefits for us humans and a little bit fed to your dog can be beneficial to them also.

Honey contains many nutrients including:

It also contains other essential nutrients, such as amino acids, antioxidants and enzymes.

There are some that believe that consuming local honey has the potential to reduce the symptoms of hay fever in humans, which also extends to animals such as dogs.

An example of a Finnish study on this subject can be found here.

There is no hard evidence to back this up though, so take it with a pinch of salt and consult your vet if your dog is suffering from a hay fever allergy for further advice.

How much honey can I give my dog?

One thing to keep in mind with honey is that it’s pretty much pure sugar!

It is sugar from natural sources, but it’s sugar all the same – and very calorie-dense.

If you are going to feed some to your dog, keep it to a sensible amount.

While it’s hard to give an exact figure for every dog, a rough guide would be to give them a very small amount such as half a teaspoon for small breeds up to a whole teaspoon for the larger types.

This is a rough guide though, it’s ultimately up to you as the owner to judge. Keep in mind what else they have had as treats that day and if you plan to feed them any more.

The high sugar content can cause issues such as stomach upset in the short term, as well as contributing to the risk of obesity in the long term.

As with anything outside of your dog’s normal diet, ensure you do not go overboard with the portions and keep it to once every so often, rather than something that they eat every day.

If you have concerns, speak to your vet for specific advice on this.

What kind of honey is safe for dogs?

As a general rule, avoid highly processed supermarket honey, that has been messed around with and will often include cheaper additives, such as high fructose or corn syrup.

Basically, just as when selecting honey for yourself, aim for high quality, local honey, that has not been overly processed.

And yes, as with most things, that usually means the more expensive stuff!

Frustratingly there is no defined single standard when it comes to honey production. This often leads to confusion, especially when you’re looking at manuka honey.

You also need to be sure that what you are buying is actually honey.

Indeed, honey is reportedly one of the 3rd most faked foods, which is worrying. Crazy right!

You can read more on this here.

Yes, manuka honey is also generally fine for your dog to eat.

Genuine manuka honey is produced in New Zealand and Australia although there is a bit of a debate as to which country has the exclusive right to claim it as their own.

As with humans, manuka honey is said to have health benefits for dogs and can help with minor ailments.

As with regular honey, avoid giving it to puppies, as they are not mature enough to digest it properly.

As with eating it yourself, scrape the wax away first and serve.

It’s incredibly tasty and your dog will no doubt love it, but keep the portions small as it’s obviously full of natural sugars and will likely spike their blood sugar levels.

Puppies should not eat unpasteurized honey or honeycomb, due to their digestive systems not yet being resistant to potential bacteria that could be present.

This risk is low, but you should avoid it as a precaution.

A small amount of good quality honey is usually perfectly fine for adult dogs to eat.

Keep it to a once every so often treat and you should be fine.

Here’s a Pin for your favourite board

No. Honey nut cheerios, or indeed any other human food such as this are not recommended for dogs,

Breakfast cereals are generally highly processed which a dog’s digestive system is not designed to cope with.

As with a lot of foods like this, it is recommended not to feed them to your dog, but if they have eaten some when you were not looking, then the likelihood is that they will be absolutely fine, but keep an eye on them and try not to let them have it in the future.

No. Although a few raw peanuts are generally considered safe for your dog to eat, varieties such as honey roasted are not recommended due to the additional salt, oil and other ingredients that are added to make them so tasty.

These extras are not recommended for your pooch, so avoid if you can.

No. Dogs should not be eating honey buns. They contain high amounts of sugar, as well as other ingredients that aren’t good for them.

As a general rule of thumb, don’t feed your dog any human foods such as these. Dogs are not able to digest them properly.

A small amount will probably be ok as a one-off, but don’t feed them honey buns as a regular treat.

Is honey harmful for dogs?

No. As above, a small amount of good quality honey is usually perfectly fine for your dog.

Just make sure it doesn’t have any of the dangerous ingredients in it, like xylitol.

Can dogs have honey peanut butter?

Again, a small amount is usually fine if it is from a brand that has fairly pure ingredients and is xylitol free.

As with most foods, the fewer ingredients, the better.

We have many other informative articles for you to read to help with your dog, such as if your dog can have bananas, cheese plus many more over at the Can My Dog Eat section.